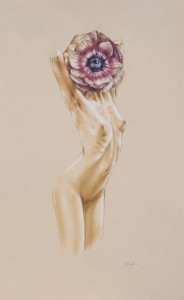 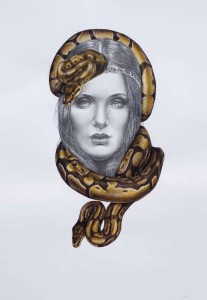 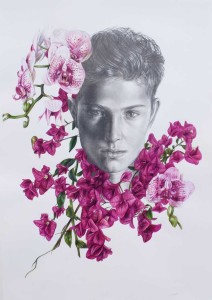 I have endeavoured to explore perceptions of beauty and gender via a diptych combining portraiture and symbolically laden imagery affiliated with the natural world. Both the male and female face epitomise the symmetry and conglomeration of features typically associated with classical beauty. The snakes surrounding the female face have phallic connotations whilst the botanical motifs in the male portrait allude to female genitalia. This metaphorically exemplifies the fluidity of gender identity and the fact that femininity and masculinity are inextricably intertwined and cannot be divorced from one another. They are integral parts of both men and women to varying degrees and exist on a continuum. This directly opposes and questions the validity of notions regarding clearly defined gender roles imposed upon the collective psyche by restrictive, patriarchal ideals of beauty and propriety in western society.

The work addresses the concept of expansion physically and conceptually via a large, intricate coloured ink drawing consisting of interconnected imagery with no single focal point.

The work is physically expansive, spreading across the large white page. It conceptually embodies the notion of intellectual or psychological expansion by endeavouring to engender it in the viewer. The vast array of intricate imagery facilitates imaginative expansion by encouraging the viewer to make personal interpretations and find connections between the disparate images, in a process reminiscent of Freudian free association. 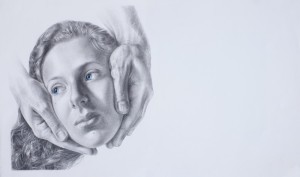 Apollo within the Oracle

Graphite and Watercolour on Paper

This portrait of the Delphic oracle in a state of trance incorporates aspects of Jungian psychoanalysis and Greek myth. The oracle’s animus has taken the archetypal form of Apollo whose  hands encircle her face. The blue eyes symbolise the absence of the conscious elements of her psyche.